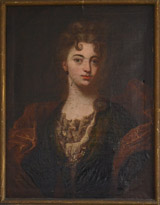 Sophia, née Countess of Nesselrode was the wife of Franz von Loe and died on 3 April 1591.

Franz has a special significance in the family history because he redesigned the castle from more or less a defence facility to a residential building. After powder was invented (and one could shoot canons up to the shores of the Niers and, therefore, into the immediate range of the castle) it lost its original defence function.

Franz took the flight forward and modified it into a renaissance castle with a purely representative character. Only the outer bailey retained its defence character. The walls with their shooting slits in the north and west still bear witness to this era.

For a long time, Franz and Sophia were considered to be the builders of the historic grain mill; moreover, a coat of arms in stone above its earlier entrance suggests this. Recent studies, however, have shown, that the mill is substantially older than the date of 1554 engraved on the stone allows us to assume. Obviously an older building (probably from the early 15th, possibly even the late 14th century) already stood on the ground plan of the (historic) mill – possibly also a mill, whose solid exterior was no longer fitting of the representative exterior of the modified main house.

Without further ado, the gable wall of the old mill (?) building was pulled down and replaced by a representative renaissance stepped gable. In the present day mill building, the gothic window alcoves – to be seen in the south west corner inside the ground floor – still bear witness of this early development phase.