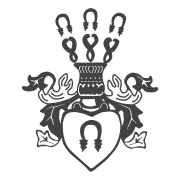 Without Lisbeth, the Loë family would probably never have come to Wissen!

Because Wessel von Loe wished to marry Lisbeth in 1461 – the von Loe family up to this point “unknown”, that is, without owning land on the left banks of the Rhine despite the outstanding services of his father, Johann, for the Duke of Kleve – he was required to present an adequate dowry. Thus it was stipulated in the marriage contract (“obviously” then still signed by the fathers) that, as condition for the marriage, the Wissen estate was to be acquired which, at the time, was being disposed of by the widow, Anna van der Straaten.

Evidently Johann did not need to worry about how to finance the purchase price – at the time, the 9250 gold thalers represented a formidable sum. Only three months after the marriage was certified, the settlement of the first purchase price instalment is recorded; the further instalments followed in the 2-year period agreed upon – the “condition” for the marriage of the young couple was, therefore, met and Wessel became the first Loe master of Wissen.