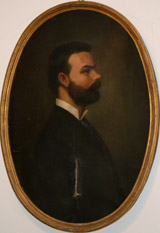 Hubertus is known as the “black sheep” of the family: born on 29 Sept. 1855 he took over the estate after the death of his father in 1879 (and, associated therewith, the title of Count). However, he indebted the estate through his passion for gambling (property was sold and large parts of the forest were chopped down to pay debts). He was disinherited and probably died at the hand of a (not satisfied -?-) creditor on 18 February 1885 in Lorenzo Marquez (Africa).

His parents, Count Max von Loe (born on 20 June 1817) and the 18 years younger Countess Therese von Loe, née Countess Arco-Zinneberg (born on 18 December 1835), belonged to the generation which characterised and redesigned Wissen the most, according to the then contemporary style.

When the two married on 6 June 1854, Wissen still had the exterior of a (white plastered) French country house. Very soon though, the decision fell on the red brick stone typical of the region, as well as the gothic forms and towers which originally characterised the castle (and which can today still be seen on the north side of the outer bailey).

Thus, the plaster applied nearly 100 years before, was struck off and the castle once again received back two (neo-) gothic stepped gables, as well as – both on the main house and on the outer bailey – previously lost towers and turrets. Only the massive tower inside the courtyard, which was demolished during the French era, and was in fact included in the plans by the architect (Vinzenz Statz, builder of the Cologne Cathedral who, inter alia, built the Kevelaer basilica), was not implemented by the owners of the castle.

Further, one of the historic halls within the castle, the present-day Billiard Room, was furnished in the same style and obtained particularly lavish carved wood panelling, as well as mirror encirclements.

Besides the modification of the main building, the erection of the neogothic – built in the Nazarene style – castle chapel (consecrated in 1876) forms one of the marked works of art and confessions of faith left to posterity.

Hubertus died, unmarried and childless, after he had already taken over the modified castle which was by then already complemented by the aforementioned chapel.