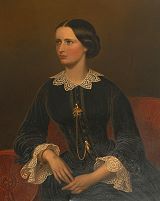 At the time of their marriage, Wissen still had the appearance of a (white plastered) French country house. Very soon though, the young generation once again set their focus on brick, so characteristic of the region, and on the gothic forms and towers, which originally characterised the castle (and which can still be seen on the north side of the outer bailey to this day).

Thus, the plaster applied nearly 100 years before, was struck off and the castle once again received back two (neo-) gothic stepped gables, as well as – both on the main house and on the outer bailey – previously lost towers and turrets. Only the massive tower inside the courtyard, which was demolished during the French era, and was in fact included in the plans by the architect (Vinzenz Statz, builder of the Cologne Cathedral who, inter alia, built the Kevelaer basilica), was not implemented by the owners of the castle.

Further, one of the historic halls within the castle, the present-day Billiard Room, was furnished in the same style and obtained particularly lavish carved wood panelling, as well as mirror encirclements.