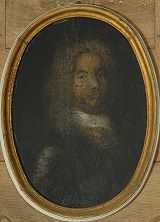 Johann was (probably) born in 1405 as son of Wessel (III) von Loe and Elisabeth (Elske) von Loe, née Overhaus, on the Loe fortress in the Veste Recklinghausen. The family’s “relocation” from Westphalia to the Lower Rhein is due to his iniviative.

As son and heir of the original family estate “Loe” in Marl close to Recklinghausen (the Loe Mill, still in existence today, was part of the original property) – he offered his services as bailiff to the Count of Cleves where he soon rose to great importance. As “court master”, a type of “interior minister”, he became one of the Count’s most important advisors and was awarded the honour of accompanying him on his trip to the holy land.

For Johann, married to Christina (Stine) von Eyll (in these early times the exact date of the marriage is usually not known), it was important that his family be domiciled in the lands of his employer.

His means of achieving this purpose was the wedding of his son, Wessel (IV) with Lysbeth von Berenbrouch (Berenbroich), daughter of the – in the region – important Goch official, Luff von Berenbrouck. In order for the young bridegroom – until this time without possession in the Rhineland – to become equal in standing to his bride, he needed to purchase an adequate estate in the duchy of Cleves.

Luckily Wissen was “on the market” at this time. The widow of Heinrich van der Straeten (who died on a crusade to the holy land) had – due to her own childlessness – already sold Wissen but, due to non-payment of the purchase price – received it back. Wissen was, therefore, up for sale again – and this time, Johann von Loe was the interested party.

In the marriage certificate –signed by both fathers (!), Johann and Luff, it was stipulated that the marriage would – as lawyers would interpret it today – remain suspended – for as long as Johann failed to acquire Wissen for his son.

Obviously Johann did not need to worry about financing the purchase price – the 9250 gold thalers constituted a massive sum at the time. Only three months after notarisation of the marriage, the settlement of the purchase price is authenticated – the marriage of the young couple is, therefore, legally binding. Wessel thus becomes the first Loe master of Wissen.

A special kind of curiosity exists out of the time of Johann which is worth mentioning: Wessel had an illegitimate half-brother named Brune, who – according to the understanding then – came from an illegitimate relationship of his father so that, as a consequence, he was not permitted to carry the name von Loe  (“only”) van Loe was allowed. At least he was enfoeffed with a small property from the Wissen estate, the farm Abbrouck.

This Brune became the founding father of a very extensive – predominantly situated in the Netherlands, numerically far superior to the original ancestral line – family (van Loe, van de Loo, van der Loo, …) which still has a very close connection to each other, as well as to the seat of their founding father and which, at regular intervals – approximately every five years – meets for family days.