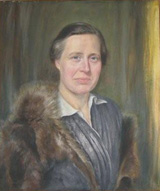 Countess Isabelle von Loe was born as eldest daughter of the hereditary prince Emanuel zu Salm-Salm from Anholt and Christine née archduchess of Austria on 13 February 1903 in Potsdam where her father served as bodyguard to the crown prince.

Her father fell during the first world war on the first day of his deployment (on the eastern front), whereupon her mother, together with her 5 children, moved to Anholt. There, Isabelle, meanwhile 21, met Count Felix von Loe at Wissen, whom she married on 8 September 1925.

They had seven children; however, their time together was (comparatively) limited due to wartime events: Felix went to war right from the start and Isabelle took over Wissen staying in contact with her husband through letters until he fell in Russia (Altschwaneburg / Latvia) in August 1944.

During the entire war, as well as in the years until her son Fritz (Count von Loe) took over the responsibility for Wissen, she was particularly concerned in maintaining the estate, as well as the castle Wissen and the well-being of the people living there.

Despite multiple requests, she did not allow herself to be evacuated, which also motivated the people living in the surrounds of the castle to do the same. Eventually a group of 80 civilians remained who – while the bombs fell in Weeze, Goch and Kleve – found refuge in the cellars of the outer bailey and practically prayed through the nights.