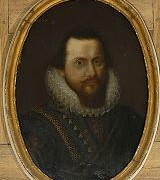 Wessel is one of the oldest (and most common) first names of our family. Not only was the first Loe master of Wissen named Wessel, we already know this first name from the time in which the family called the Loe fortress in Marl their home – the first reference to this name going back to the 13th century!

Wessel, the first master of Wissen, was born as the (oldest?) son of Johann von Loe and Christina (Stine) of Eyll in Marl, near the present day Recklinghausen. His father, Johann, entered into the services of the Duke of Cleves and became – as court master – one of his most important advisors.

As Wessel prepared to marry Lysbeth von Berenbrouck (Berenbroich), daughter of the – in the region – important Goch official, Luff von Berenbrouck, certain obstacles initially arose due to the lack of possession of property of the (Loe) family in the duchy of Cleves (and even in the Rhineland).

Luckily Wissen was “on the market” at this time. The widow of Heinrich van der Straeten (who died on a crusade to the holy land) had – due to her own childlessness – already sold Wissen but, due to non-payment of the purchase price – received it back. Wissen was, therefore, up for sale again – and this time, Johann von Loe was the interested party.

In the marriage certificate –signed by both fathers (!), Johann and Luff, it was stipulated that the marriage would – as lawyers would interpret it today – remain suspended – for as long as Johann failed to acquire Wissen.

Obviously Johann did not need to worry about financing the purchase price – the 9250 gold thalers constituted a massive sum at the time. Only three months after notarisation of the marriage, the settlement of the purchase price is authenticated – the marriage of the young couple is, therefore, legally binding. Wessel thus becomes the first Loe master of Wissen.