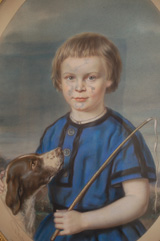 As a Dominican monk he took on the name of Paulus, under which he reached a certain prominence.

Brother Paulus lived in / around Munich and did not only become famous though his teaching activity for the order but also due to his being exceptionally “scatterbrained”: As an example it can be mentioned that he finally found a long-lost slipper in the library – well-hidden as a bookmark in a book.

Apart from Paulus, his sister Mathilde also entered the Dominican order and was cofounder of a community which settled in Wetten.