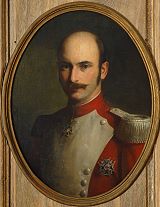 In this case, the name Fritz does not refer to “the old Fritz” (Friedrich the Great – 1712 to 1786). It rather refers to a frequently recurring boy’s name spanning across the generations – beginning approximately at the start of the 19th century.

The one referred to here, Friedrich Leopold – called Fritz – was the second of seven children of Max and Therese Count and Countess von Loe, and was born on 28 May 1861 in Wissen.

After his older brother, Hubertus Max, was disinherited because of his gambling passion (in order to repay his debts, Wissen forests had to be cut down to a substantial extent) Fritz already succeeded his father in 1879 after his death (only a few weeks after his silver wedding anniversary).

He started by not having parts of his agricultural property farmed by tenants, but to farm the land under his own management. To this purpose, a homestead (today located vis-á-vis the castle on the other side of the B9) was converted into an agricultural estate and, moreover, bulls were held in the west wing of the outer bailey. He thereby expanded his field of entrepreneurial activities (up to this time, a forestry operation, a sawmill, an oil-, as well as a grain mill and a brick works already existed) by a further source of income.

At the same time, he was politically active in the Weeze community and as from 1897 he became their mayor.

On 14 June 1888 Fritz married Countess Paula von Korff-Schmising from Tatenhausen. Their marriage produced four children – Degenhard, Clemens, Maria and Felix. The latter was only three years old when his father, not yet thirty nine years old, died of pneumonia on 14 April 1899.