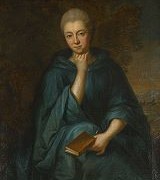 The name, Alexandrina(e) appeared twice in the family history, in fact, in two consecutive generations. Both the wife of Baron Franz Karl von Loe, and the wife of her oldest son, Edmond, were baptised under this first name.

Important for the castle’s building history was the external and to this day characteristic “unification” of the outer bailey, which at the time comprised – alone on the east wing – (at least) five different roofs.

After the gate house – originating from the renaissance period and equipped with a drawbridge – was replaced during the middle of the 18th century with the present day (Couven) gate house and its pertaining stone bridge – it was subsequently followed  by an approximately 8 meter long facade (present day appearance) set in front of the old buildings of the east wing. This structure is best seen from the bridge at the mill. The original gothic arches, still visible on the south facade of the outer bailey, end exactly 8 meters before the south east corner and document the original eastern boundary of the outer bailey – a middle wing set between the west- and east wing. The middle wing is limited to the south by the said original gothic defence wall (which received its present day windows during the time of Franz Karl and Alexandrina and which, up to this point, possessed merely crenels as openings) and to the north, by the present day courtyard facade in its harsh but clear structure.

The acquisition of the Adendorf property (close to Meckenheim), with its beautiful, almost perfectly preserved renaissance style moated castle, falls into the time of Franz Karl and Alexandrina. It was purchased as widow’s seat for the family, later though, excluded property wise. Today’s owner of Schloss Adendorf is a cousin of the owner of Schloss Wissen.

Alexandrine, born as Countess von Merveldt on 25 January 1766, became Alexandrina’s daughter-in-law through marriage to her son, Edmond on 27 July 1783.