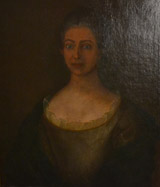 In the year 2006 a Weeze businessman was asked on a training course by another participant whether he had contact to the house of Wissen.

As the question was answered in the affirmative, his dialogue partner told him that he was in the possession of a portrait stemming from Wissen, which his wife had inherited from her aunt. During the twenties / thirties of the past century, the aunt had taken care of a lady known as “Tante Wirtz” in her local neighbourhood in Münster (Westphalia) until she died.

This “Tante Wirtz” worked for many decades as companion at Schloss Wissen. As such, not only did she support the respective housewife in running the household, she also represented the housewife in contact / making conversation with abruptly materialising guests when the aforementioned was not at home.

It was self-evident for the family that guests were always welcome. As one regularly visited family and friends – often unannounced (communication via telephone was not yet possible and communication by postal service was incredibly tedious) – it was entirely possible to not encounter the owners upon arrival. In this case, it was the companion who was responsible to entertain the guests and ensure their wellbeing until the return of the owners.

“Tante Wirtz” was such a companion. She worked in Wissen during the time of Countess Paula von Loë (née Countess von Korff-Schmising), great grandmother of the current landlord of Wissen. She was bid farewell at the end of her service period with a portrait.

This portrait has now returned to Wissen – as present of the dialogue partner. In comparison with the portraits of the daughters of the house during the late nineteen hundreds, it becomes apparent that the portrayed lady is (presumably) not a member of the family. On the contrary, it can be assumed that “Tante Wirtz” herself posed for the artist.