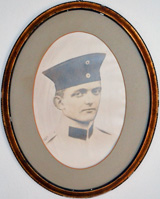 Already at the age of six, he became a half-orphan. Three years after the death of his father though, his mother married Fritz’s youngest brother, Baron Georg von Loë. Up to the coming of age of her children (from her first marriage), she lived at Wissen. Soon after the wedding of Paula and Georg, the west wing of the outer bailey was modified – obviously especially for her adolescent sons, to which Clemens also belonged. Stables and storage places gave way to (on the ground floor) utility rooms (washing) and a small apartment for the gate keeper, as well as (on the upper floor) bed- and living rooms for children and guests.

As later born son, Clemens chose a military career, namely as a marine. He entered the First World War as a lieutenant, and fell only a few weeks later on 11 October 1914 in France. Only a year later, his older brother Degenhard suffered the same fate in Russia.

Thus Felix, the third-born (son) and youngest of the siblings, took over the estate. He was also not able to hand over the estate to the next generation, as he succumbed to his wounds – suffered the day before – in Alt-Schwaneburg (Latvia) on 25 August 1944.