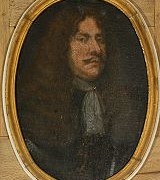 In Degenhardt-Bertram’s generation the family was threatened with extinction – in his generation, Degenhardt Bertram was the only living male member of the family. Admittedly, he was himself richly gifted with children – he had five daughters and three sons. Degenhardt-Bertram lived in turbulent times – reformation – counter reformation – 30-year war, die Croatians looting and pillaging through Kevelaer – looting, or similar, cannot be reported from Wissen.

Likewise, the beginning of the Kevelaer Pilgrimage falls into his time, where in 1643 Hendrick Bussmann received the instruction to build a chapel dedicated to the mother of God. Degenhardt-Bertram donated that part of the “Kapellenplatz” on which the first pilgrimage church (the present day Candle Chapel) was built.

Degenhardt-Bertram is the first Baron von Loe. By decree of 20.10.1629, he was raised to the status of an imperial baron.