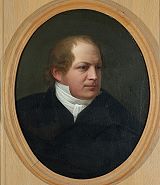 No significant construction measures fell into Friedrich Karl’s time, as his parents and grandparents had already substantially modified the main house and associated buildings.

He probably also lacked the necessary financial means, as it was up to him, to reverse – as far as possible – the defacto splitting (effected under French inheritance law), which resulted in the weakening of the estate. He succeeded in purchasing back substantial parts of the inheritances which had fallen to his sisters, or to have them given back to him.

On the other hand, independent family branches developed from his brothers’ inheritances, inter alia Phillipe (Mheer, Province of Limburg), which still exist – in part – today.