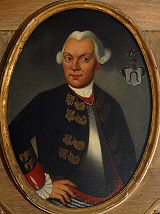 During his time, the main house was rebuilt in the style of a French country house, one of the few castles which Napoleon already came upon in its French “outfit” when he advanced up to the Rhine. The aforementioned modification was so radical that it could lead to the assumption that after the modification it was not the same castle but rather a similar one, even though it stood on the same ground plan (view building history).

Edmond was a royal Prussian major, since 1804 (royal Prussian) state councillor and from 1806, senator in Paris where he represented the Rhineland in the French Empire.

Because he was not averse to Napoleon’s politics, he was raised to the French rank of count on 15 June 1808 (Comte de l’empire – as primogenitor title (only applicable to the firstborn)).

Finally, the family has one more curiosity to thank Edmond for. His “French orientation” went so far that modified the name Loe (originally lower German strained e). Thus two dots were placed on the “e” and one pronounced the name in French, with an emphasis on the “e”. After the Lower Rhine once again became Prussian in 1815, the family reverted to pronouncing the name in the lower German diction. The two dots on the “e” were, however, preserved for posterity and today still lead – almost on a daily basis – to confusion.